Taichung Travel Guide: Things to do in Taichung Taiwan

As the second-largest city in Taiwan, Taichung (台中) is a vibrant city with a thriving cultural scene. Located on the west coast of Taiwan, Taichung rose as an economic, transportation and cultural hub during the Japanese occupation period due to the development of highways and railway. The city has a modern landscape and open spaces that are welcoming to both locals and tourists.

I quite like Taichung as the city experienced the Japanese Colonial Era where the city is shaped by Japanese culture. Today, you will find many Japanese influences in Taichung, from city streets, cuisine and almost every aspect of life in Taichung.

Besides finding the remnants of Japanese culture, there are many exciting attractions in Taichung. Let me show you exactly what you can do and see in Taichung.

Before you visit Taichung in Taiwan

Before you go to Taichung, take a look at my post on all my best tips for travelling to Taiwan. I included a lot of information, including getting a Taiwan prepaid SIM card, transportation around the country and more.

Here are a few quick tips for travelling to Taichung:

Disclosure: This post may contain affiliate links. If you buy something through them, I will receive a small commission at no additional cost to you. Thank you for supporting this website. For more information, please read our disclosure for more info.

How to get to Taichung

From Taichung International Airport to Taichung

Taichung is accessible by air and there are daily domestic and international flights (from Hong Kong, Macau, Vietnam, and Thailand) fly directly into Taichung International Airport.

From the airport, several buses will take you into Taichung. Alternatively, you can take a metered taxi.

Below is a few sample routes from the Taichung International Airport to Taichung.

From Taipei to Taichung

The fastest way of getting from Taipei to Taichung is to take the Metro (MRT) from Taiwan Taoyuan International Airport to Taipei Main Train Station. Then take Taiwan High-Speed Railway (HSR) to Taichung.

However, Taichung HSR Station is at the edge of the city, so you will have to hop on another local train to go into the town. Get on the Taiwan Railways Administration (TRA) train at Xinwuri Station, which is a one minute walk from Taichung HSR Station.

Alternatively, you can take TRA, a regular train from Taipei to Taichung for a much cheaper price.

From Tainan to Taichung

If you are coming from the south, you could be coming from Tainan (臺南), Kaohsiung (高雄) or other cities. You can either go to Taichung with a high-speed train (with a transfer to a regular train) or a regular commuter train.

See below for a few sample routes from Tainan to Taichung.

Where to stay in Taichung Taiwan

There are many excellent affordable hotels and hostels Taichung. The majority of them are around Taichung Railway Station, which is a good location because of its accessibility to major attractions.

Another option is to stay in Xitun District (西屯區) which is further north of the city. But the location is quite good as well because it is close to shops, restaurants and Feng Jia Night Market.

I stayed in both hostels and hotels in Taichung, and I am pleasantly surprised by the quality and cleanliness of both options. I wrote an entire post on where to stay in Taichung as a solo traveller.

Below are highlights from my post. As always, I booked my hostels and hotels at Agoda as it is my go-to website for accommodations.

Taichung Travel Guide: What to do in Taichung Taiwan

Taichung is a hub for all things art and culture. You can do a one day tour of all the art and cultural attractions mentioned below and another day wandering around the city for the rest of the tourist attractions.

Whatever you do, make sure to take a look at the map above and add these Taichung attractions to your itinerary.

Built between 1972 and 1976, Taichung Confucius Temple is designed and constructed in a classic architectural style of the Song Dynasty. The temple complex layout resembles the original Confucius Temple in Qufu, Shandong, which is also the birthplace of Confucius in China.

Even if you don’t know much about the history of the temple, it is worth seeing the grandeur of the temple. The roofs and beams are decorated with many different colours and materials. And colourful paintings in the Song style are found in each hall.

Paochueh Temple was built to commemorate all the fallen Japanese soldiers during World War II. Since their remains were not claimed, the deceased were gathered into the columbaria at the temple. Many Japanese tourists come here to pay their respects every year.

The temple includes the old temple surrounded by a new structure and the giant golden laughing Buddha.

As the oldest park in the city, Taichung Park spans over 10 acres where you will find Rih-Yue Lake, an artificial lake, an arch bridge and Hu Xin Pavilion, which is a double pavilion that was built to commemorate the Crossway Railway in 1908. Locals like to hang out here because of all the outdoor recreational equipment like tennis courts and playgrounds.

At the west end of Taichung, you will find the whimsical and colourful Rainbow Village. It is a very popular spot for taking photos for Instagram. There are tons of photo ops in just a small block of colourful houses.

Walkthrough all the narrow pathways, and you will find colourful surprises around each corner. And if you are lucky, you might even get to meet Rainbow Grandpa, who painted the houses to help save the village as it was about to be demolished by the government.

The National Taiwan Museum of Fine Arts (NTMoFA) has exhibits by Taiwanese artists with a focus on modern and contemporary art. Part of the museum’s mission is to encourage art exchange with overseas organizations and promote art education.

The museum includes all the outdoor exhibits in the outdoor courtyard and within the main building spanning over four floors. Admission is entirely free.

CMP (China Metal Products) Block Museum of Arts is indeed one-of-a-kind! It is the first museum in Taiwan to use outdoor spaces to display contemporary art installations. The structure-less museum is next to Calligraphy Greenway, where all the exhibits seamlessly integrate into nature.

Painted Animation Lane is a small alley full of graffiti of anime and popular cartoon characters. You might recognize some of the cartoon characters like Super Mario Brothers, Popeye, Dragon Ball, and more. Colourful murals are painted on both sides of the alley, and it is best to go during the day to fully appreciate this delightful art scene.

At the mouth of Dajia River, you will find Gaomei Wetlands. The grassy and muddy wetland spans over 1,500 acres of land, and you can walk on the long boardwalk to enjoy the scenery. Also, it is an excellent spot for bird watching during winter as many migratory birds stay over winter. And it has one of the best places to catch the sunsets in Taichung.

Gaomei Wetlands is a popular spot for locals and tourists on the weekends. There are food stalls where you can try some of the best Taiwanese food. Just make sure to check the tide times before going. When it is high tide, you may not be able to walk around as freely.

You can easily spend a day at Gaomei Wetlands, along with Wuqi Fisherman’s Harbour and Luce Memorial Chapel.

The Luce Memorial Chapel is part of Tunghai University in Taichung. It is a Christian chapel to honour Rev. Henry W. Luce, who is an American missionary in China during the late 19th century.

The design of the chapel is quite unusual. The chapel is on an irregular hexagonal base, with a curvy tent-like structure acting as the walls and roof for the chapel. The continuous external structure is composed of repeating yellow glazed diamond-shaped tiles, which resembles the diamond-shaped lattice interior walls.

Other than the art and culture that Taichung is known for, there is an abundance of outdoor activities in Taichung vicinity. One of the most popular hiking spots is in Da Keng Scenic Area. Da Keng has ten trails where the first four are the most difficult.

Located at the east end of Taichung, the easiest way to get there is by Uber. Go early in the morning and start at trail #4 (which is the hardest one and the most scenic). Continue onto trail #5 and take either trail #2 or #1 back to the main road and hop on a local bus #66 back to Taichung.

Try Taiwanese food at one of many night markets in Taichung

Try some of the best Taiwanese classic food at these night markets in Taichung:

If you are a bubble tea fan, then don’t leave Taichung without trying THE original bubble tea at the original home of this Taiwanese specialty. I ordered a vegetarian noodle and a lotus wrap sticky rice too!

Eat your way around Taichung

Below are some budget, mid-range restaurants and bubble tea shop suggestions. You can find more information about each location in each pin in the attached google map (see above).

If you want to see Taiwan with a tour, check out some of these tour ideas: 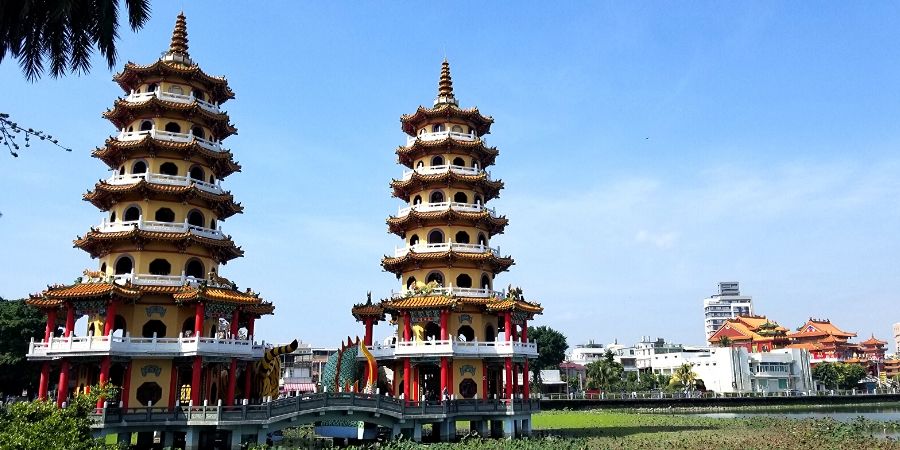 Kaohsiung Travel Guide: Best Things To Do in Kaohsiung Taiwan 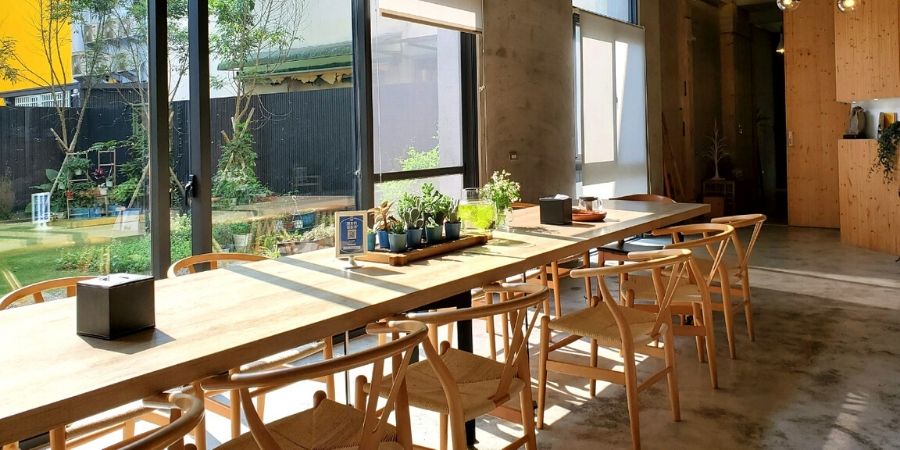 Tainan Travel Guide: Things to do in Tainan as a Solo Traveller

Things to do in Taipei Taiwan as a Solo Traveller

I've been thinking alot the past few days about ev

Happy International Women’s day! 💕 . To all

I’ve been in Hong Kong for exactly a year now. I

The Covid situation is getting better in Hong Kong

Happy Chinese New Year! Today is the first day of