Espinho, Portugal is a quaint coastal town 20 km south of Porto. Located in the Aveiro District, Espinho is known for its white-sand beaches, delicious seafood and the biggest open-air market in Portugal.

Even though there are many beaches along Costa Verde that are ideal for a day trip from Porto, Espinho has the best beaches along the west coast.

In this post, I’ll show you all the best things to do in Espinho Portugal and how you can see everything in one day. The easy day trip from Porto to Espinho only requires a 45-minute train ride. So pack your beach essentials and follow my one-day Espinho itinerary!

What you need to know before going to Espinho Portugal

Before you spend the day in Espinho, take a look at some of these useful travel tips:

How to travel from Porto to Espinho

The easiest way and cheapest way to travel from Porto to Espinho is by taking the urban train. You can start the journey from either Sao Bento Station or Campanha Station in Porto.

All you have to do is buy a ticket from the counter or kiosk. This means you pay €0.50 for the reusable card and one title (means one ticket) for the cost of the train journey to Espinho.

Porto to Espinho by train

This is the same train line going to Aveiro. And remember to keep the card to take the train from Espinho to Porto. And make sure to validate your card before getting on the train.

Things to do in Espinho Portugal: 1-day itinerary

All the Espinho attractions in my one-day itinerary are numbered and pinned on the interactive Google Map. All you have to do is to follow the red numbered pins throughout the day and see all the best sights in Espinho efficiently and effortlessly.

Your day in Espinho Portugal starts in the open square not far from Espinho Station. There is a tall smokestack, a church and a museum at the perimeter of the square.

First, there is a small and humble little church called Capela de S. Pedro. Part of the entrance facade and the lower half of the interior walls are covered with typical Portuguese azulejos (blue and white tiles).

The church gets a huge crowd especially on June 29 when the town celebrates its patron saints. The annual event is a big festival which includes music and a parade.

The other attraction in the square worth mentioning is the Museu Municipal De Espinho (Municipal Museum of Espinho) in the Fórum de Arte e Cultura de Espinho (Espinho Art and Culture Forum).

The museum has a permanent exhibition display collection of the former Brandão Gomes Factory including photographs, and different products from the factory including sardine cans. And the Arte-Xávega Collection showcases fishing materials, boats, baskets, ropes and various parts of the boats. Plus, it has old photographs of the daily lives of the fishing industry.

And in the Espinho Art and Culture Forum, there are dedicated spaces for research and cultural development. It has functioning educational service rooms and training rooms to promote learning.

For a low price of €1.20 (free on Saturdays), you can see the two permanent collections, other temporary exhibits, and a tour around the building.

Feira Semanal de Espinho is an open-air market that has been around since 1894. Its popularity grew and became the largest weekly market in Portugal.

And the market itself is massive! As I was walking through the market, I thought it would be two or three blocks, but it kept on going for another few blocks. It extended all the way to the railway tracks.

The prices at the market are better than shopping anywhere else. And if you buy something from the vendors, you are supporting small businesses and local farmers.

Budget tip: it is cheaper to buy produce at the end of the day when vendors are packing up to go home. When you are ready to go back to Porto, and the market is still open, walk back and see what fresh produce you can get for a discounted price.

Igreja Paroquial de Espinho (Parish Church of Espinho) or Paróquia de Nossa Senhora D’Ajuda (Noosa Senhora da Ajuda Church) is a Catholic Church built at the end of the 19th century. It is one of the most prominent churches in Espinho Portugal.

On the outside, there are characteristics of neo-romanesque architectural aesthetics. And there’s even a bell tower embedded into the entrance facade.

And on the inside, the Latin cross-shaped church has a few side chapels. In one of the side chapels, there is a large image of the Crucified Christ in polychrome wood.

João de Deus Public Park is located in the heart of Espinho. The spacious park has leafy trees, a huge lawn. Locals love coming here to rest, read, or enjoy the park. There are many spots with shade, which is great for hot summers in Espinho.

And the park is really well situated. It is right next to Câmara Municipal de Espinho (Municipality of Espinho), the public library, the Multimeios Cultural Center, and the center of Espinho town.

If you wandered the entire open-air market, this might be a good spot for a short break.

As I mentioned earlier, the Espinho city centre is right next to João de Deus Public Park. The city centre consists of a few blocks of pedestrian-friendly roads. The streets are filled with retail shops, restaurants, cafes, and other facilities like banks and grocery stores.

The shopping isn’t as great as in Porto but it is still fun to walk through the shopping streets of a small town in Portugal.

Praia da Baia is one of the best beaches for surfing in Portugal. The white-sand beach is located between the two breakwaters next to a wide pedestrian promenade. It is excellent for swimming, surfing and simply relaxing on the beach.

This beach on Costa Verde is very popular with locals and visitors throughout the year. Plus, it draws an even bigger crowd whenever there are competitions held at Praia da Baía. Athletes come to this beach to compete in beach volleyball, surfing and bodyboard championships.

You don’t have to bring many things to Praia da Baia. It is possible to rent a sunshade on the beach. And if you want to surf, board rentals are available at one of the surf schools. And when you are hungry, there are seafood restaurants and beach cafes by the promenade.

Moreover, if you stick around until the end of the day, you can catch an awesome sunset on the beach.

Even though you can swim in the Atlantic Ocean at Praia da Baia, you might want to try the seawater swimming pools at Piscina Solário Atlântico.

As a thalassotherapy center, it uses seawater to promote health and physical well-being. It is said that seawater has many healing properties including improvement of blood circulation, an increase in red and white blood cells, and is excellent for the skin.

Within the white architectural building, there are two outdoor seawater pools, an indoor heated pool, a health club with a sauna, massage rooms, a jacuzzi, and a fitness room.

And the admission to the public pool building is quite reasonable too. Not a bad way to spend the afternoon in Espinho.

Right across from Piscina Solário Atlântico is Praia da Frente Azul. This beach is quieter and not as busy than Praia da Baia.

The white-sand beach is just north of the breakwater. You can also rent one of the blue-and-white striped sunshades.

Personally, I like Praia da Frente Azul better than Praia da Baia because it is not as rowdy. I think it is the perfect spot for suntanning and relaxing.

There is a long stretch of pedestrian boardwalk along Costa Verde between Esmorize to the south and Vila Nova de Gaia to the north.

And at Espinho, Passadiço Espinho, the elevated boardwalk starts at the north end of Praia da Frente Azul, right behind the big Espinho sign.

Passadiço Espinho is excellent for walking and cycling while seeing the Espinho coastal views and sandy beaches.

Instead of taking the train from Espinho to Porto, you can walk the entire boardwalk all the way to the next train station, which is Granja Station. And from Granja Station, take the train back to Porto.

The trail is approximately 3km long. The last stretch of the path goes through a neighbourhood. Keep walking along Av. Sacadura Cabral and the road will lead you to Granja Station.

Otherwise, enjoy a bit of the boardwalk and walk back to Espinho Station and catch the next train back to Porto.

What and where to at in Espinho Portugal

There are a few things you must eat in Espinho. Since the town is right next to the sea, there are plenty of seafood options. And I tried the grilled prawns and squid at Os Melinhos and it was absolutely one of the best meals I ever had!

Besides the usual Portuguese seafood you get, here are some of the specialties you must try in Espinho:

Many Espinho seafood restaurants line the beach promenade and along R.41 (the street north of Espinho Municipal Museum). Here are a few suggestions (see the burgundy pins on the map):

Other things to do in Espinho if you have more time

Are you ready to visit Espinho Portugal?

If you are spending a few days in Porto and want an enjoyable day trip excursion to the quaint town with nice beaches, then you’ll have to make your way to Espinho. It is an easy day trip for a solo traveller and you get to spend time on one of the best beaches along Costa Verde.

Or if you are in other parts of northern Portugal like Aveiro or Coimbra, the efficient train system can also take you to Espinho in less than an hour.

Let me know what you think of the itinerary! Did you find it useful? 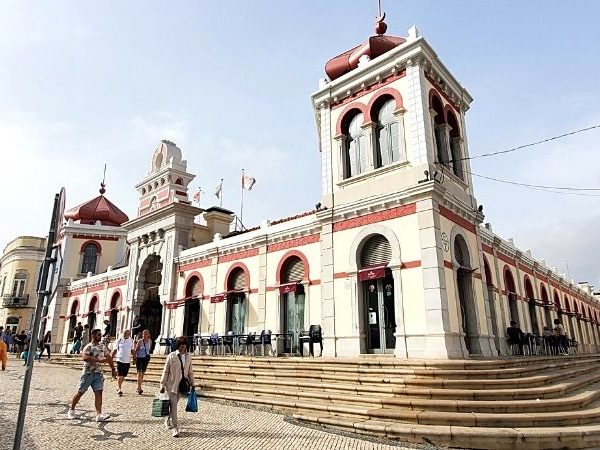 Things to do in Loulé Portugal: Day Trip Itinerary from Albufeira or Faro 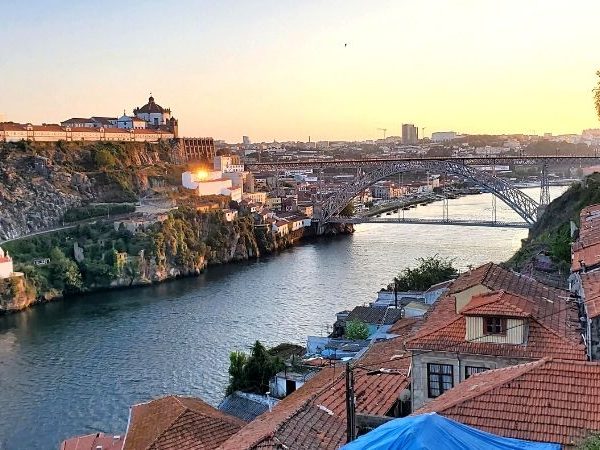 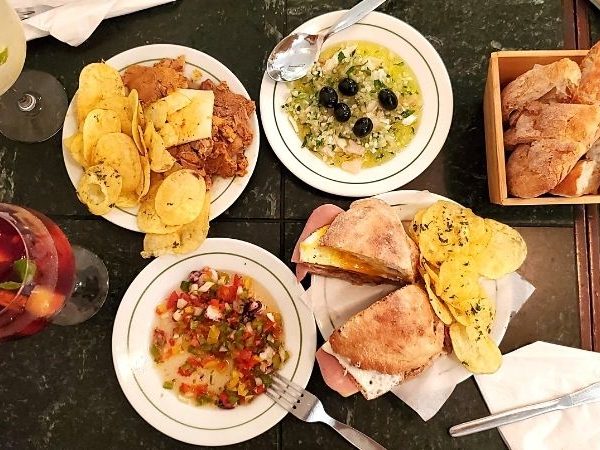 17 Best Porto Food: Where and What to Eat in Porto Portugal

Best Hotels in Bali: Where to stay in Bali Indonesia as a Solo Traveller

Taiwan Travel Tips: Things to Know Before Visiting Taiwan as a Solo Traveller