25 Best Bucharest Food: Where and What to eat in Bucharest Romania

Before going to Romania, I knew nothing about the food in Bucharest. But after spending three weeks in the capital city, I am in love with Romanian traditional food! Seriously, Bucharest food is on another level!

If you travel solo to Bucharest and want food suggestions, then keep reading. I’ll show you all the best food in Bucharest and where to find them. From Romanian street food, traditional sides and starters, to hearty Romanian entrees, you’ll find something you love. Make sure to save room for some Romanian desserts and some Romanian bevies.

If you love eating as much as I do and are excited to go on a culinary journey in Bucharest, then get ready! I’ll show you exactly what to eat in Bucharest and where to find the best food in the city.

Disclosure: This post may contain affiliate links. If you buy something through them, I will receive a small commission at no additional cost. Thank you for supporting this website. For more information, please read the disclosure for more info.

Tips for eating the best food in Bucharest

See the summary of the best food to try in Bucharest below. This is a quick guide for you when searching for what to eat in Bucharest.

And when you scroll down, I include a more extended explanation for each food and the best restaurants in Bucharest to try these specialities. And I included photos so you know what each food looks like.

Here is a quick summary of the 25 best food in Bucharest:

Where to eat in Bucharest: best places to eat

Below is a list of the best places to eat in Bucharest. And in all of these food outlets and restaurants, you can find the local specialties listed above.

To find the address for each location, click on the restaurant name, which will bring you to the location on Google Maps.

What and where to eat Romanian snacks in Bucharest

What is Covrigi: Romanian pretzels. The traditional pretzel comes with poppy seeds, sesame seeds or salt grains. But there are special covrigi that are made with cheese or Nutella and in a form of a hot dog. It is popular street food in Romania because it is something you can eat on the go.

What is Scovergă: traditional Romanian fried flatbread served with either savoury or sweet ingredients. The savoury flatbread includes sour cream, cheese and garlic. But if you like sweet, try it with jam. This Romanian snack is similar to Hungarian lángos.

What is Gogoși: Romanian sweet pastries. This popular street food is either a flatted fried dough with icing sugar or filled with cheese, chocolate, or apricot jam. Think of it as a doughnut.

What is Merdenea cu brânză: Traditional Romanian cheese pastry. It is savoury, a bit salty and super flakey. It tastes the best when it is hot out of the oven. And it is one of the best cheap eats in Bucharest.

What and where to eat Romanian starters and sides

What is Zacuscă: Romanian vegetable spread made with roasted eggplant and roasted Gogosari (red) peppers, onions, and tomato paste. Put it on bread or eat it with grilled meatballs. This is a popular spread in the Balkan region.

What is Salata de Vinete: Romanian roasted eggplant salad made with onions, lemon juice and salt. They call it a salad but it is more like a dip. It is eaten as a spread on bread or eaten by itself. (See photo above)

What is Ardei Copti: Romanian roasted pepper salad. Simple red peppers are grilled to perfection and sliced and drenched in oil and vinegar. Good on bread or as a side for your entree.

What is Ardei Umpluti: Romanian stuffed peppers made with whole peppers, ground pork, rice and herbs. The entire pepper is covered in tomato sauce and baked until it is ready. Then sour cream is added before serving. A portion is quite big so if you are a light eater or not very hungry, this can be a main dish.

What is Jumări: Romanian-style pork cracklings aka deep-fried pork belly or pork rinds. This is typically served after the pigs’ sacrifice on St. Ignatius Day (December 20) but you can find it in an appetizer platter at most Romanian Restaurants in Bucharest. Eat it by itself or with mustard, onion and bread.

What is Bulz: Romanian side dish made with polenta and sheep cheese. The dish is oven baked or rolled into a ball. Sometimes bacon or ham is added to the mix.

What is Ciorba: Traditional Romanian sour soup. The most typical one is made with beans and smoked ham. But there are other varieties including meatballs, beef, chicken, and bean sour soup. And if you dare, try the tripe soup (ciorba de burta).

What and where to eat traditional Romanian dishes in Bucharest

What is Mici: or Mititei is Romanian grilled sausages with no casing. It is made with ground beef, pork, garlic, paprika, and thyme. “Meech” means “the little one” and is a very popular street food. It is typically served with fries or bread and a lot of mustard. So garlicky and oh so good!

What is Chiftele: Romanian meatballs are jam-packed with ingredients. These meat patties start with ground pork and beef, then bread crumbs, garlic, egg, dill and grated potato are added to the mix. Eat the meatballs by themselves or add a side to them. Remember Zacuscă? It is a great dipping sauce for these meatballs!

What is mixed grill platter: If you can’t decide which barbecue meat you want then definitely order a mixed grill platter. Generally, it comes with mici, steak, pork chop, chicken, and sausage and is served with fries and mustard. Many restaurants serve platters for two people or more, but there is a handful that serves platters for one.

What is Roasted pork knuckle: or pork hock is served with braised sour cabbage and polenta or potato. The pork meat is juicy and a bit oily but super tasty. Many restaurants serve a portion for two people and a few serves a single portion. But even the single portion is quite big – just look at the photo!

What is Tochitura: Traditional Romanian stew made with pork, sausage, onions, garlic, and spices in a tomato sauce. It is served with polenta, grated cheese and a fried egg. Depending on the restaurant, sometimes it is called Moldovan stew since the dish originated in the region of Moldavia.

What is Sarmale: Romanian cabbage rolls are made with sour cabbage (sauerkraut) stuffed with minced meat (pork, beef or veal) and rice and cooked in tomato sauce. And it is served with bacon and polenta. Many Eastern European countries have a similar version but the cabbage roll in Romania is made with sour cabbage. It’s a big part of Christmas in Romanian households but is also a staple in many restaurants in Bucharest.

What is Carp brine: Carp is a common fish in Eastern European countries. And in Romania, carp brine is made with tomatoes, bell peppers, onion and garlic. And is served with polenta. It’s a popular dish for Christmas but also in some Romanian restaurants in Bucharest throughout the year.

What and where to eat Romanian desserts

What is Papanasi: Romanian fried doughnuts. Typically, this traditional dessert has a doughnut with a hole and round doughnuts. Then they are covered with sour cream and jam. The sauce really compliments the fried dough. You have to try papanasi when you are in Romania – you won’t find it anywhere else!

What is Clătite: Romanian pancake. The pancake is relatively thin; I would even call it a crepe. Try the unique pancake with sweet cheese and raisin (clătite cu brânză dulce și stafide). This is a combo that I found all over Bucharest.

What is Salam de Biscuiti: In English, it means biscuit salami. It is a no-bake chocolate roll with biscuits and rum essence. And when you cut the roll, the section of the roll looks like salami, hence the name. This authentic dessert is a favourite among Romanians and there’s even a cake version at some of the restaurants in Bucharest.

What and where to drink typical Romanian beverages

What is Lemonade: flavoured homemade lemonade is everywhere! Cafes and restaurants in Bucharest make their own version of lemonade with still or sparkling water and different fruit flavours. I’ve tried mint lemonade and lemonade with elderflower; both excellent and thirst-quenching.

Where to drink Lemonade: most cafes and restaurants in Bucharest

What is Romanian beer: Beers in Romania are pretty good. I am not a beer connoisseur or anything, but I like to try locally-made beers. Look for Timisoreana, Ursus, Ciucas, Silva and Zaganu. And also try the beers brewed at some of the local restaurants in Bucharest.

What is Țuică: Tradițional Romanian plum-based spirit that contains between 20 to 60% alcohol. This flavoured spirit is unique to Romania. Usually, a shot glass of țuica is consumed before the meal. And you sip it, not shoot it.

Where to drink Țuică: cafes and restaurants in Bucharest serve different brands of țuica

Best Bucharest food: which one do you want to try?

If you are staying in Bucharest for a few days, you can easily try many of these local specialties especially when you combine a few in one meal.

And when you use this food guide, you can quickly look at which Bucharest food you want to try and select the restaurant you want to go to. I’ve done all the research so you can enjoy your trip.

So the big question is – which of this Bucharest food are you interested in trying? Let me know in the comments or if you have other suggestions for places to eat in Bucharest.

Food around the world: 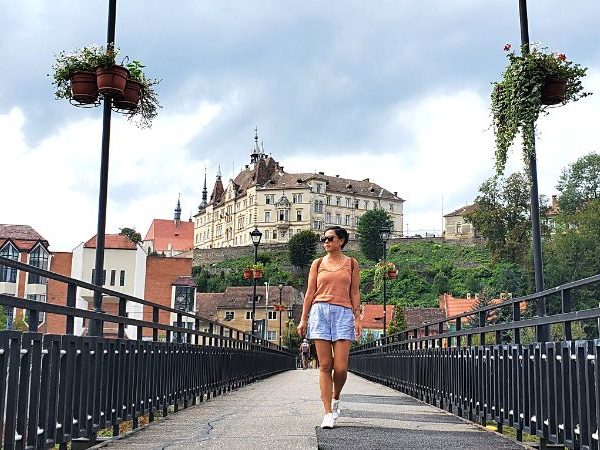 10 Things to do in Sighisoara Romania and 1-Day Itinerary 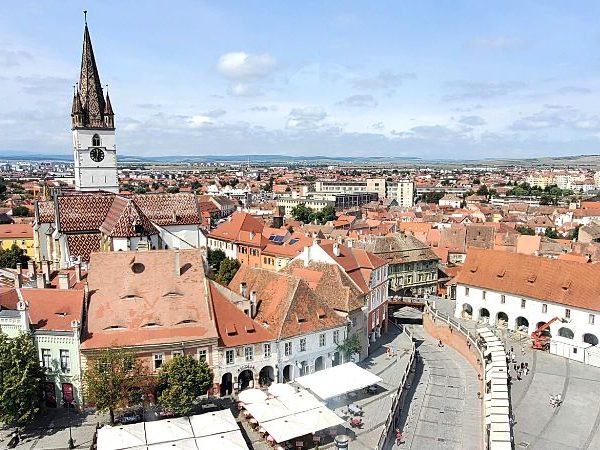 Best things to do in Sibiu Romania Alone: One day in Sibiu 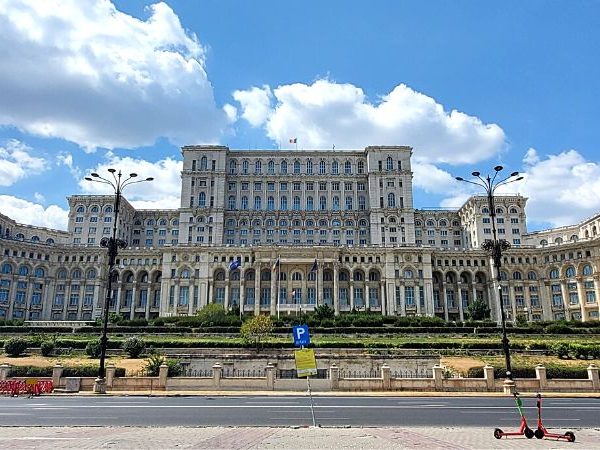 Things to do Alone in Bucharest Romania: 1, 2 and 3-day Bucharest itinerary

Best things to do in Vilamoura and Quarteira: 1-day Itinerary from Albufeira or Faro in Portugal

10 Things to do in Sighisoara Romania and 1-Day Itinerary