One Day in Coimbra Portugal as a Solo Traveller

The best part about being spontaneous on a trip is that you never know what you will see and where you will go. I thought I was going to be hanging out in Lisbon for a month, but then I knew I would regret if I don’t see other parts of Portugal.

As soon as I figured out I needed to see Northern Portugal, I researched and see what my options are. I actually decided to visit Coimbra because I found some amazing photos on Instagram of the ancient city. And the more I learned about Coimbra, the more I wanted to go!

As the third biggest city in Portugal, this medieval city has so much warmth and charm. Situated about an hour and a half south of Porto and just an hour inland from the coast, the hilly town of Coimbra is a welcoming place for travellers. While the city has young vibrant energy due to the student population, you can also feel the old world charm. Coimbra is one of the oldest cities in Europe where you can still see many old churches and cobblestoned streets in the old town.

Why Coimbra is great for a solo female traveller

Coimbra is a very welcoming city since the city has a mix population of locals and students from all over the world. Everyone I met was friendly and helpful. And it is not an intimidating place for solo female travellers. I felt completely safe even when I have my headphones on while walking around the city.

The city is compact enough that you can either visit the city on a day trip or stay overnight. I was making my way south from Porto and stopped in Aveiro for the day and continued on my way to Coimbra. It is a very common route, and there are many direct trains from Porto to Aveiro and Aveiro to Coimbra. I love how efficient the train system is in Portugal! And both train rides only cost about 4-5 EUR each trip. A super reasonable price for efficient transportation!

And because of the young population in Coimbra, there are many establishments catered to students and anyone who enjoys the nightlife. If you enjoy a night out in the town, you have to visit Coimbra!

What to do in Coimbra

If you have one or two days travelling through Northern Portugal, definitely make your way to Coimbra and see what the university town is all about.

When you walk through baixa, you will most likely come across Rua Ferreira Borges, the main pedestrian street in Coimbra city centre. Just north of the main street, you will find Igreja de Santa Cruz (Santa Cruz Monastery). The interior of the monastery has azulejo, the blue and white glazed tiles, lining both sides of the church telling the story of Portugal’s history. The monastery is also the resting place for two historical figures, the first two kings of Portugal, Afonso Henriques and Sancho I.

When you walk towards the Mondego River, you will find Arco de Almedina, which will lead you to the University of Coimbra. The arc is the remaining entrance gate to the original city of Coimbra and one of the last examples of Moorish architecture in the city.

When you keep walking further on the main street, cross Ponte de Santa Clara bridge, and find Monastery of Santa Clara-a-Nova, a beautiful monastery where you can visit the tomb of Queen Isabel of Aragon, the Patroness Saint of Coimbra.

The University of Coimbra was founded on March 1, 1290, by King D. Dinis. As a UNESCO World Heritage Site since 2013, the campus has many historical buildings, churches and a botanical garden that has more than 13 hectares of garden containing unique floral collection to educate and promote conservation of biodiversity.

As mentioned, there are many churches on the university campus, but the most well-known church is Sé Velha de Coimbra (Old Cathedral). The famous 12th-century cathedral has traces of Renaissance style on the northern facade, Gothic cloisters and remnants of the previously destoryed church as well.

Touring the university is one of the highlights when you visit Coimbra. For 12 EUR, you can visit:

Considered as the Venice of Portugal, Aveiro is a small port and fishing town where it has three canals with gondola-type boats called barcos moliceiros. The small town is not super touristy but it definitely has its charm. Visit Aveiro Cathedral and Capela de São Gonçalinho while you are in there or simply stroll through the small streets and along the canals. If you want to move at a faster pace, you can get a free bike from BUGA for the day.

And when your stomach rumbles, order a suckling pork sandwich for lunch at Tasquinha Do Leitao and purchase some traditional Aveiro desserts called Ovos Moles at Confeitaria Peixinho.

And if you want to visit a town full of street art, drive to Covilhã, which takes about 2 hours. Taking the train is possible too but it will take longer.

What to eat in Coimbra

Since I travel months at a time, I am really conscious of eating healthy while I am on the road. In Coimbra, I shopped at Pingo Doce, a local supermarket, where I get my fruits and vegetables (and maybe some cheese and pâté). Yum! But it’s been rather tempting to try all the conventual sweets in Coimbra! Keep reading!

As much as I love pastéis de nata (Portuguese custard tart), Coimbra is known for its sweet, sweet desserts as Coimbra’s heritage is full of in conventual sweets. When sugar appeared in the 15th century, it was used in ancient recipes in convents. Nuns would make sweets to welcome guests. These conventual desserts are made with large amounts of sugar and egg yolks. Some of them include:

Suspiros (meringue) – made with beaten egg whites and sugar. While the yolks are used for other regional desserts, there were a lot of egg whites left over. So the nuns in the convents made meringues

Pastéis de Tentúgal – created by the Carmelitas nuns of the “Carmelo de Tentúgal”. It is an egg yolk and sugar filling inside a thin and crispy puff pastry

Ovos Moles (“soft eggs”) – originally came from the Convent of Jesus in Aveiro. It is made with raw egg yolks and refined white cane sugar syrup. The ingredients are gently boiled and folded then wrapped in rice paper in the shape of seashells (because Aveiro is a coastal city)

Where to eat in Coimbra

While I wasn’t sampling all the conventual sweets in Coimbra, I managed to get few good meals too. When you are in Coimbra, try these places:

Sandes de Leitão – R. das Padeiras 35; there’s no menu here, and they only serve one thing: leitão (suckling pig)! The pork sandwich has to be one of the best sandwiches I’ve ever had!! And I got a mini Sagres (beer) too!

Restaurante Rio Mondego II – 8, R. do Corvo; they have a lunch special where you can an entrée with soup, bread, 0.25L of water or wine, dessert and coffee for 10 EUR! Choose from a variety of grilled fish and meat. Seabass was delish!

Café Santa Cruz – Praça 8 de Maio; built as part of the church and they are known for their pastél de santa clara. And check out the unique interior while you are there.

Pastelaria Briosa Coimbra – 5, Largo da Portagem; this pastelerias is very popular, and there’s always a lineup for tourists to buy pastries. I snuck in and ordered a pastéis de tentúgal and coffee with milk

Where to stay in Coimbra

As a solo traveller, I always pick an accommodation base on a few things: location, price, cleanliness of the room and the bathroom. And the type of accommodation can vary between hotel, hostels and Airbnb room and apartment.

I was fortunate when I found the most beautiful apartment in Coimbra! I searched through Agoda and Airbnb a few times for places to stay in Coimbra a few weeks before my trip but didn’t find anything appealing. But just a week before going to Coimbra, I found the lovely studio apartment in Coimbra and it was absolutely the best place ever! The apartment is brand new, renovated in a contemporary style that I like, and I was the third person living in the space. The studio apartment is comfortable for one to two people, with a good size kitchen and a spotless bathroom. But it is located on top of the hill, but no biggie at all! I had to find a way to work out and burn off all the desserts I was having!

Related Post – Everything you need to know before booking Airbnb

For more travel planning resources, check out my Amazon picks: 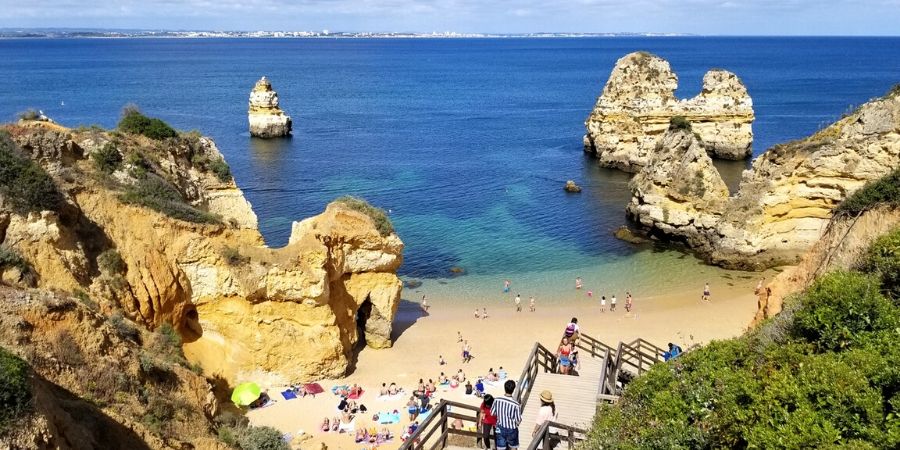 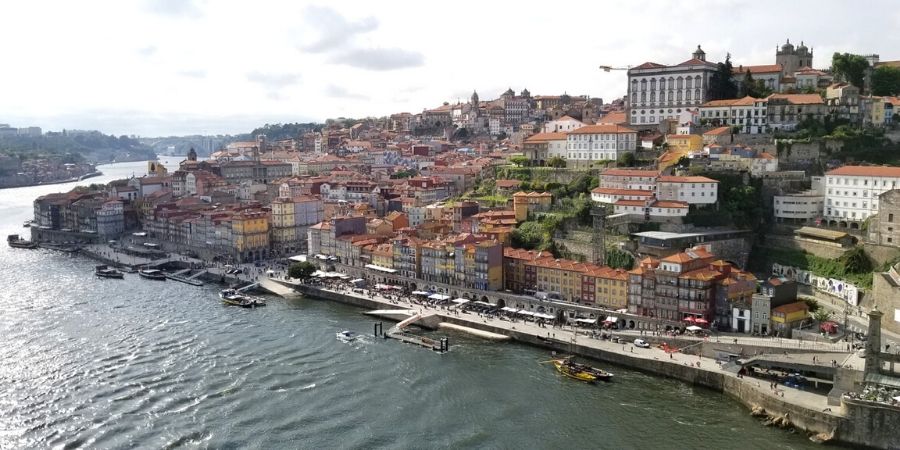 My Ultimate 2 Week Itinerary for Portugal

Minimalist Travel: My 10 Must Have Essential Travel Items for Every Trip

My number one tip on how to save money for travel

17 Things to Know Before Travelling to Australia

Hong Kong and Singapore just announced that they w

It is Chung Yeung Festival this weekend in Hong Ko

I’ve been following the news and it looks like T

It’s not officially fall yet, but the weather is